Around Zoe´s first birthday, I purchased the Melissa & Doug Magnetic Wooden Alphabet´s as a way of keeping her close yet busy while I was in the kitchen. The magnets are still there on our dishwasher and she still uses them. Little did I know then but it was one of my greatest toy investments.
We started to go through the alphabet, one letter at a time, each day playing with a different letter. If she was having a difficult time saying or remembering the letter, we´d stick with it for a few more days. I got the idea from Sesame Street´s, ¨Letter of the Day¨game. So, one by one we would use the letter all day long (upper and lower case). I´d say the letter throughout the day, use different words starting with the letter and play a game where I ask her to find the letter amongst the other letters. We would ask her to bring the letter to us from the kitchen, when she did, we´d all high five! Easy. Fun. She ended up knowing the entire alphabet in one month. When we would have company over, we played the alphabet game with company. They would ask her for a letter and she would run to the kitchen and come back with the letter. She was so proud of herself and our guests would think it´s just the cutest thing ever.
What was the cutest and neatest thing to me, was being out and having her recognize the letters and say them out loud. I would stand in front of the street sign or whatever she was reading and go through each letter with her...high fives all day. 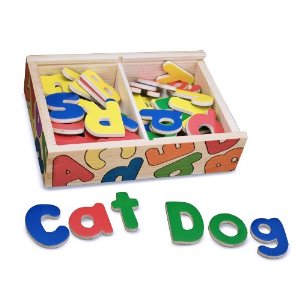