Last Saturday I co-hosted a bridal shower for my friend Karla in Santa Clarita, California. I was in charge of the dessert table and with the help of her other amazing bridesmaids we executed the sweetest tea party on the planet.

Let me begin giving details of the party by starting with my duty, the dessert table.

I made the bunting with 12x12 paper (cut into 5, 4¨ wide triangles per sheet) , twine and a hot glue gun. I used left over bunting paper to make small 1.5¨ wide bunting for the cake stand bottom crate.

My fellow bridesmaid had the cake done by a woman she has used before. It was fondant on the outside and vanilla cream inside.
As you can see behind the cake above, I wanted to add something special to the bunting, so I printed photos of the bride-to-be with her bridesmaids...old photos, new photos and ones that she never thought would be shown at a party...I had to have a little fun with it. She really loved the personal touch and so did the guests.

I had the photos printed in antique to stay in sync with the vintage feel of the dessert table. I used small clothes pins to pin them along side the bunting.

I found the little blue jewelry box at The Goodwill for $4.99, I had to make sure this made it to the dessert table.


Here are photos of the party. P.S. All floral arrangements were made by the groom to be! Guys, this will land you a great wife...not fantasy football. 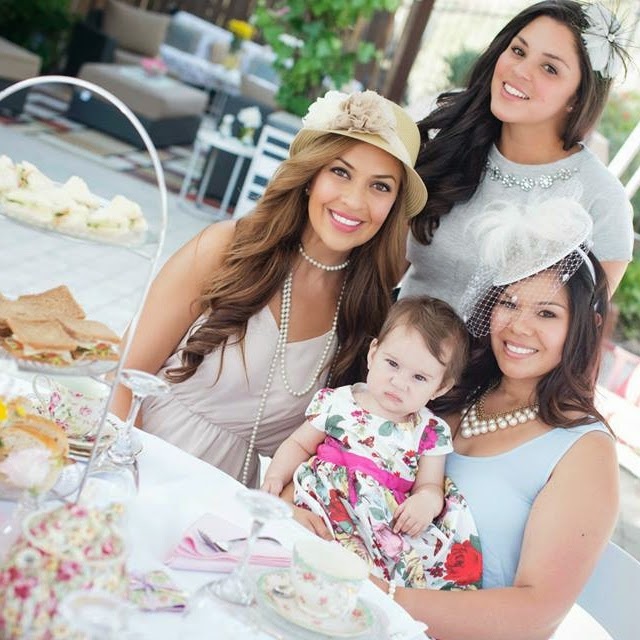 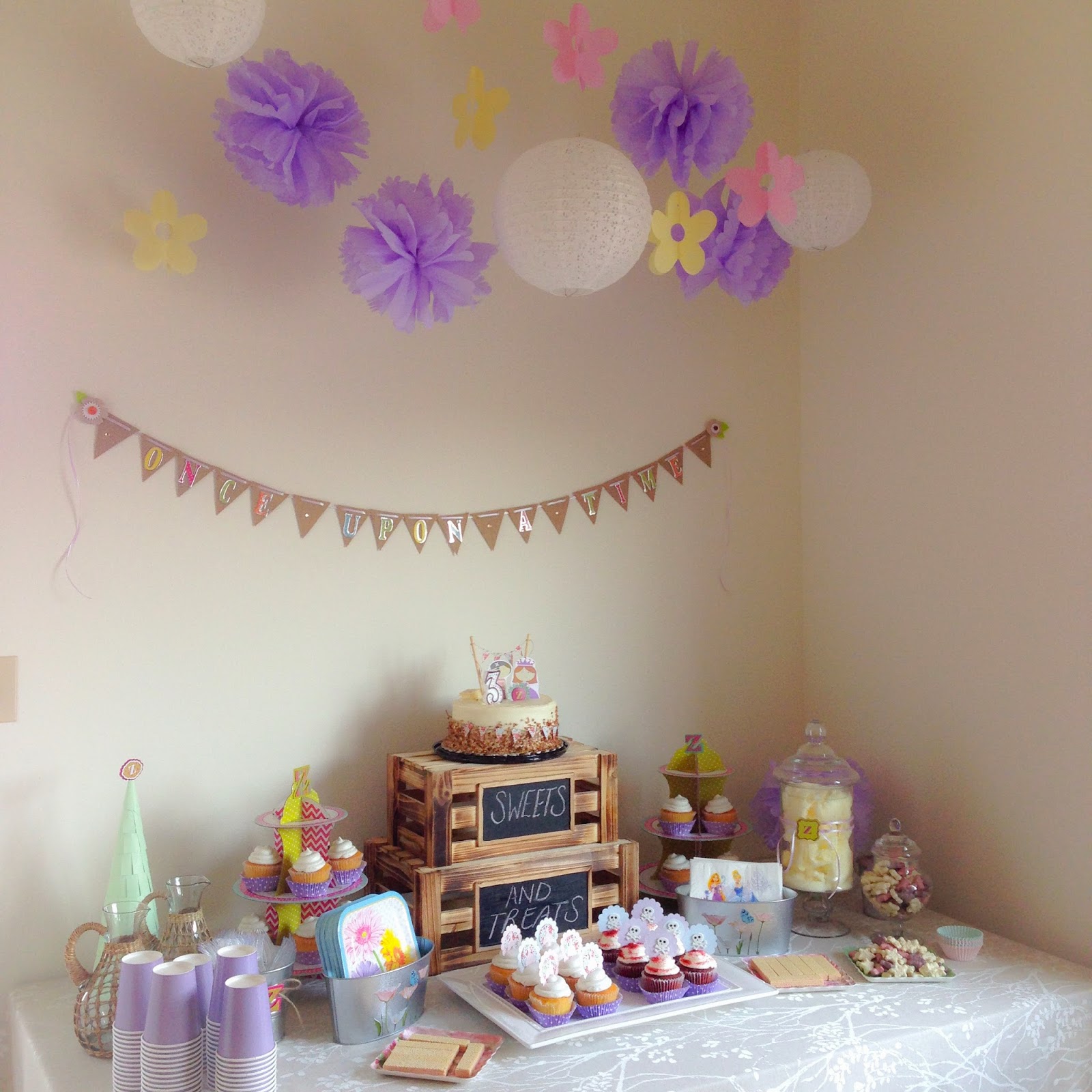 I made the dessert table seen above for my little ones third birthday. Since we wanted a theme both little girls and boys would enjoy, we went with a Princess and Pirate theme. She actually loves princesses and pirates equally so it was great for her as well.

As for the actual table decor, hanging over the dessert table, I hung the 3 to a pack Martha Stewart White Eyelet lanterns from Michael´s and lavender colored pom-poms from the 99 cent store. The paper flowers were cut out from left over flower garland from another dessert table. I made the ¨Once Upon a Time¨ banner with burlap paper that was left over from a previous banner project, silver lined multi colored letters I hot glued on to the paper, and weaved in lilac colored ribbon into holes I made in to the burlap paper with a simple hole puncher. I used some left over jeweled stickers and flowers to add to the ends of the banner. 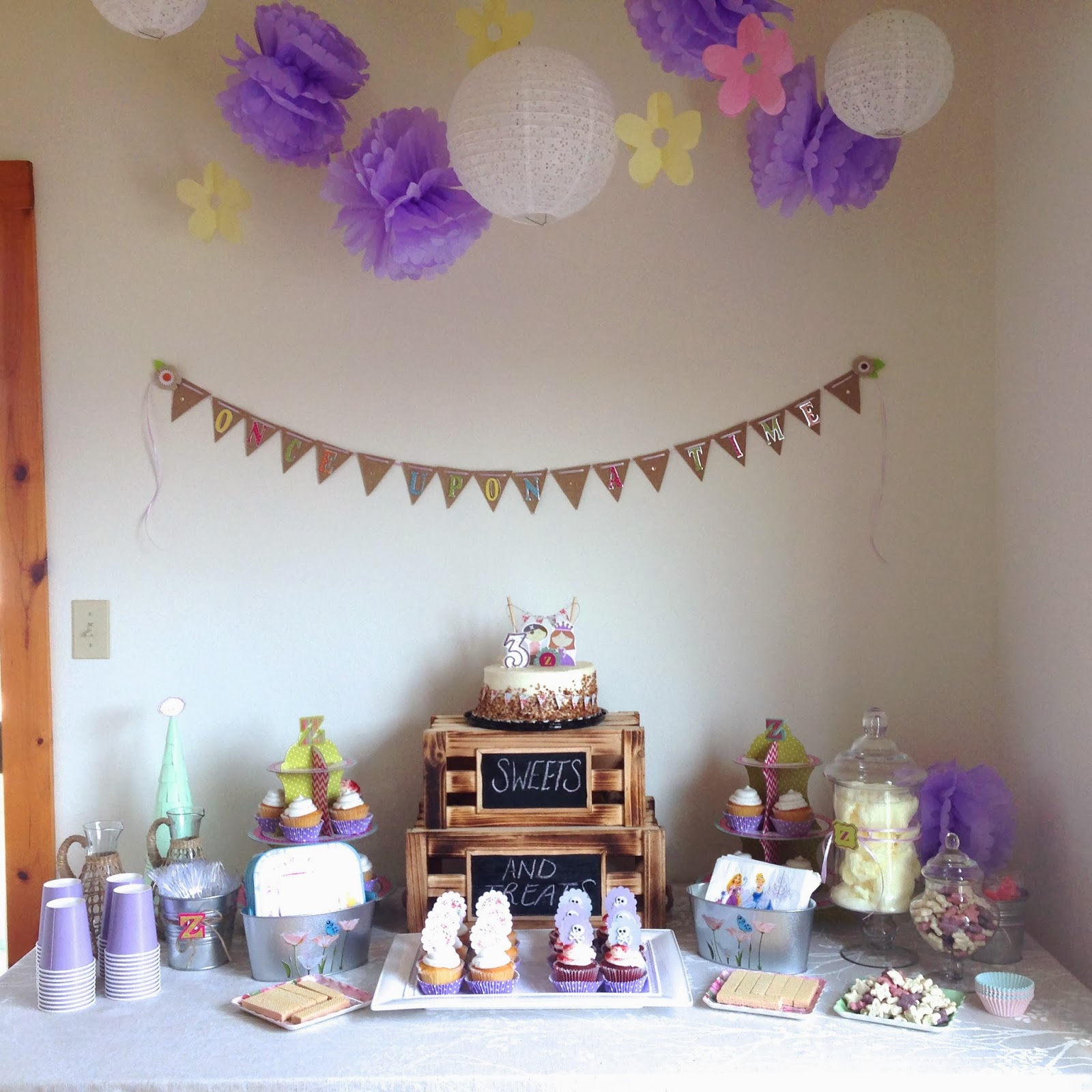 Instead of buying gourmet cupcakes, these cupcakes are from a local bakery that come 4 in a box. I placed the cupcakes into lavender and white polka dot cupcake holders I bought at Jo Ann´s. 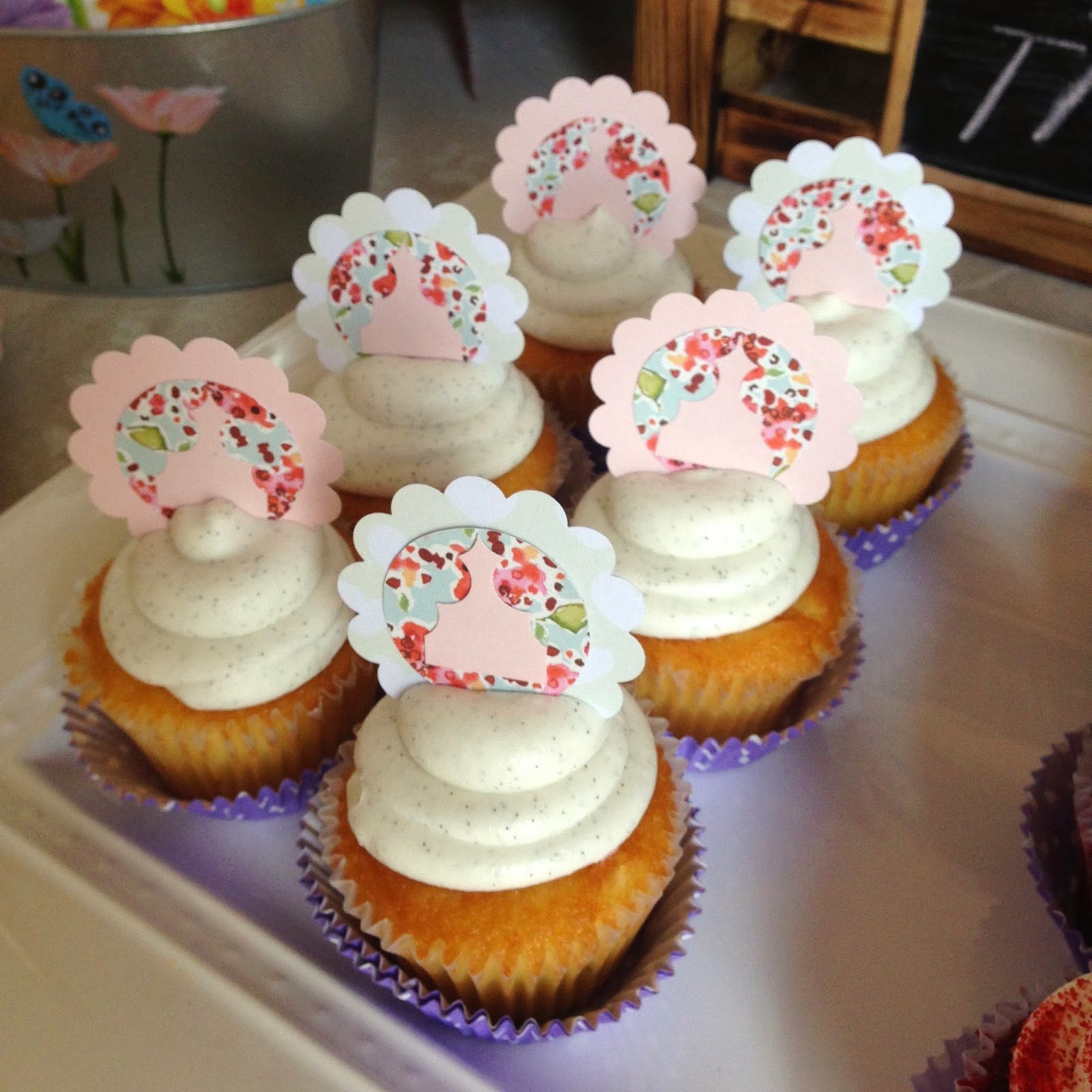 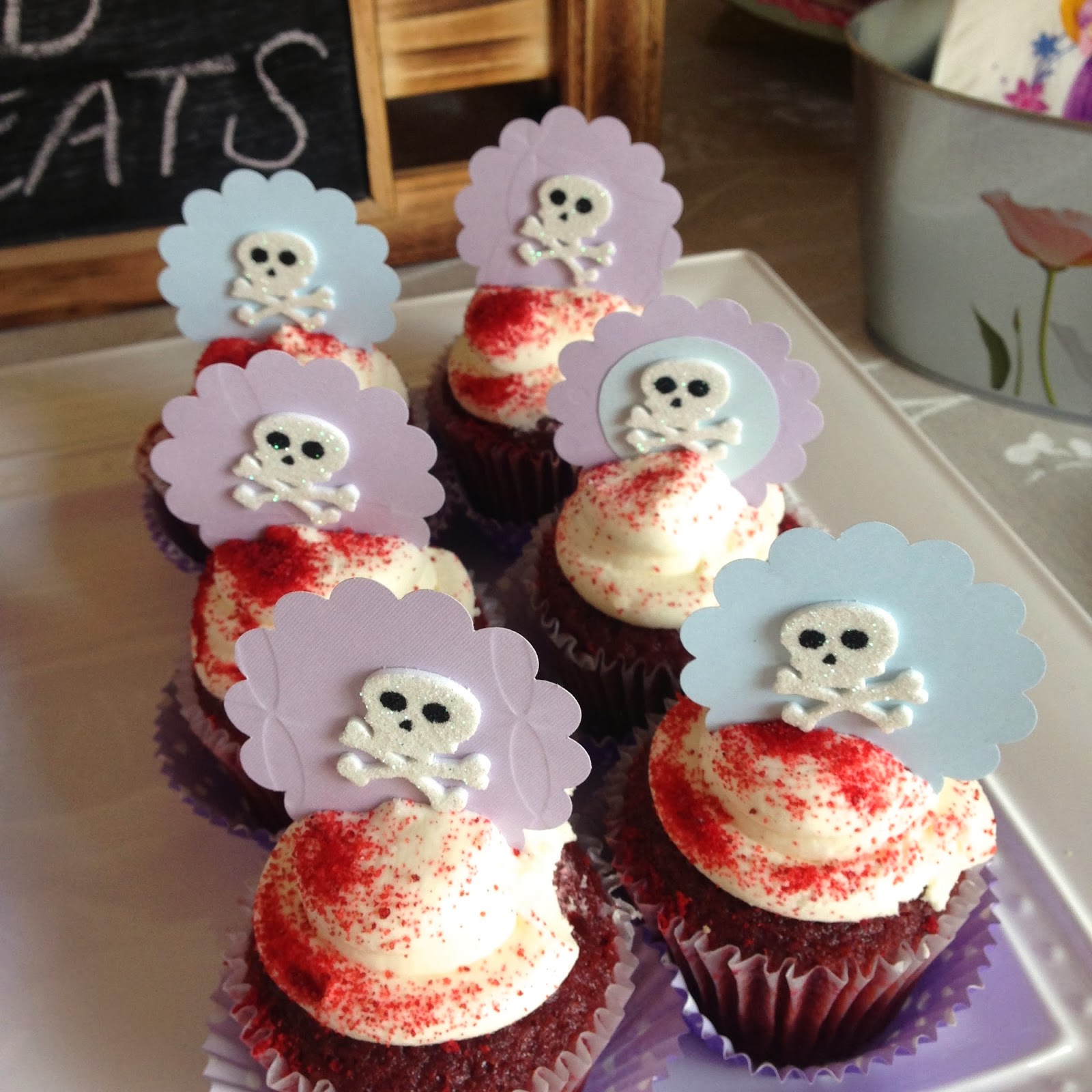 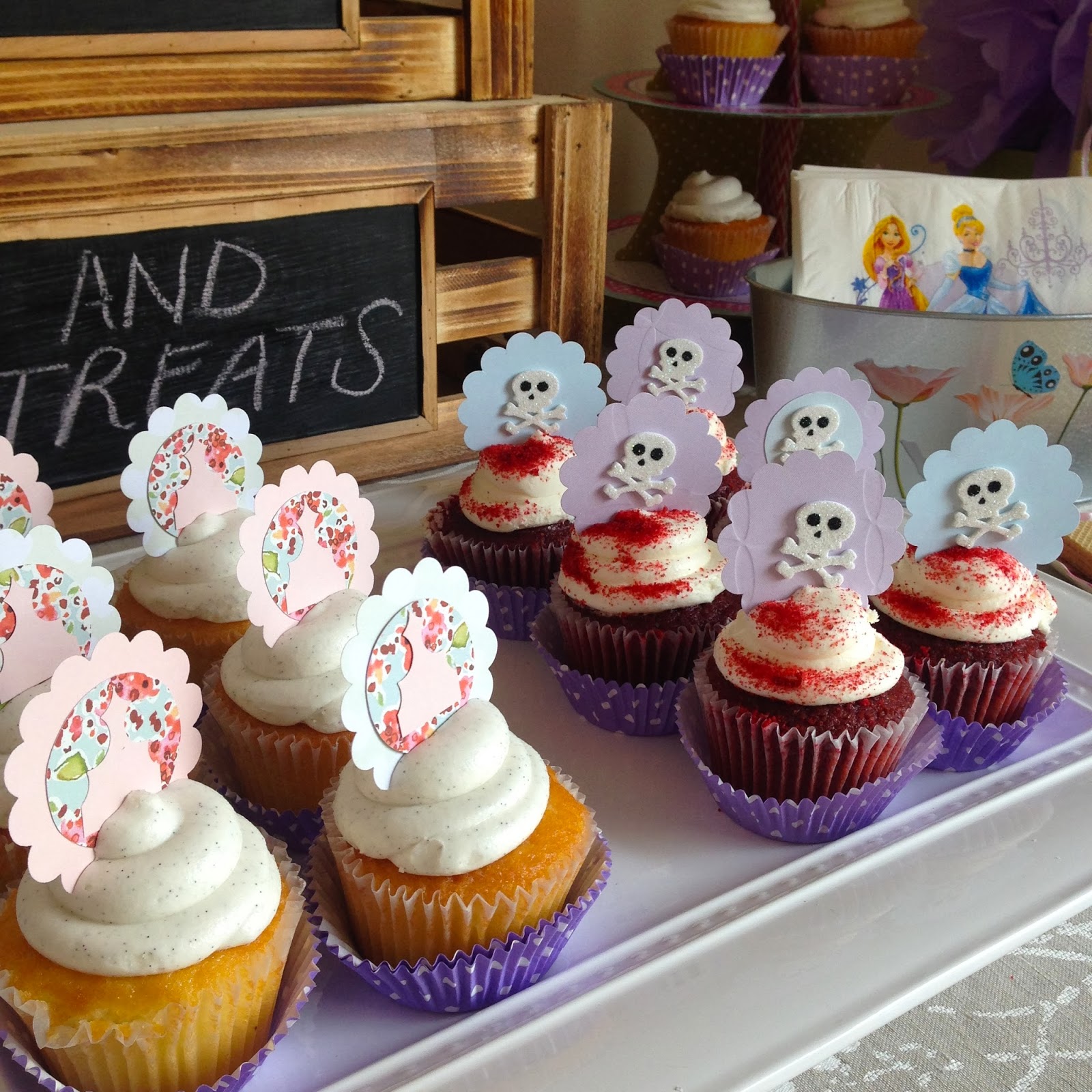 As for the cake...since I was on a budget, I had to get a little creative. I bought a Italian Creme cake from the local bakery and made my own cake decor. I cut out a little princess and pirate I found online and embellished the princesses crown and wand with jewels left over from the banner. I printed both the princess and pirate out of card stock. I made the cake bunting from a shabby chic styled card stock, twine and a wood skewer. I made the banner around the cake from the same material. Finally, I added the number 3 candle and a little Z embellishment I found at Michael´s as well.

Here is a link to a tutorial on Easy Cake Bunting 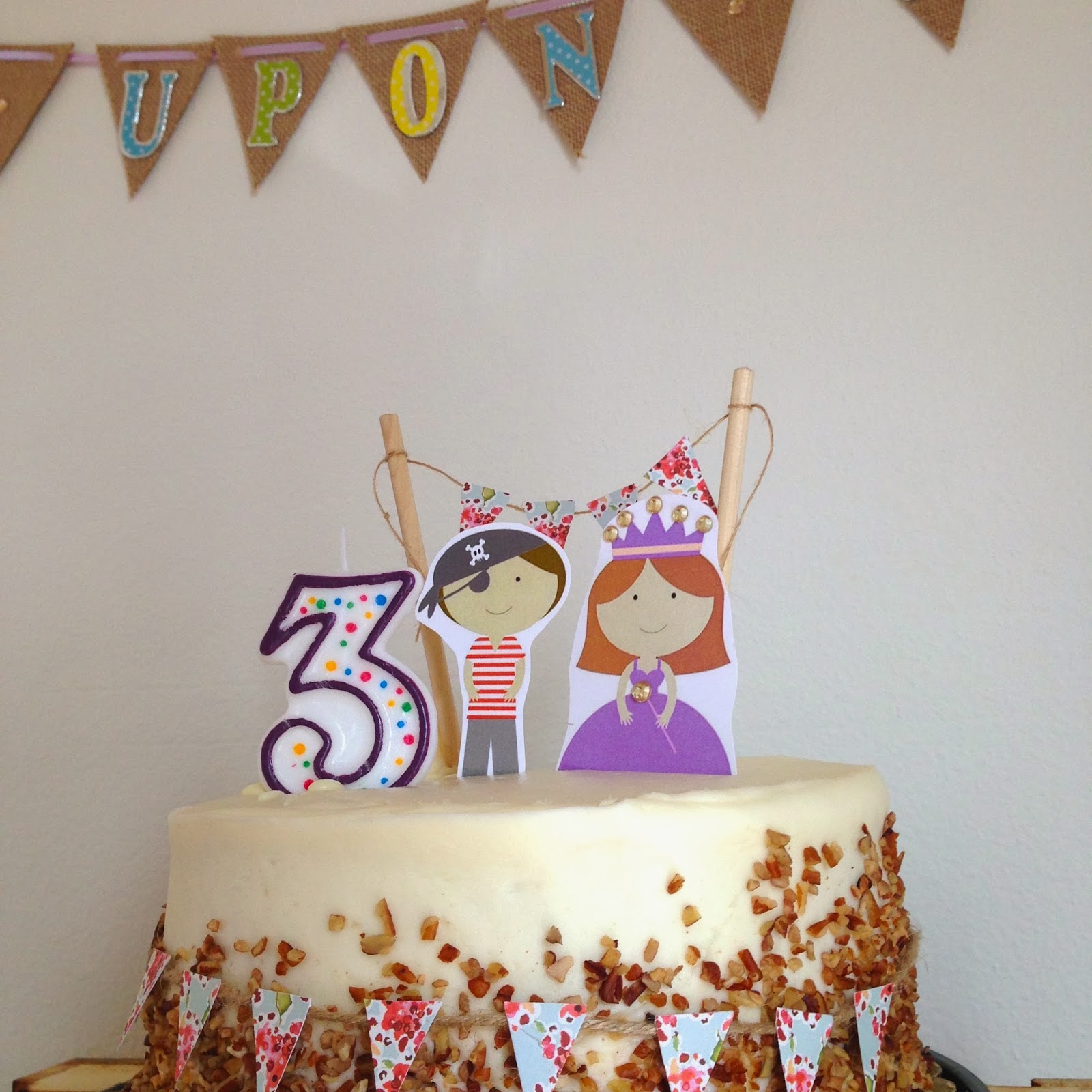 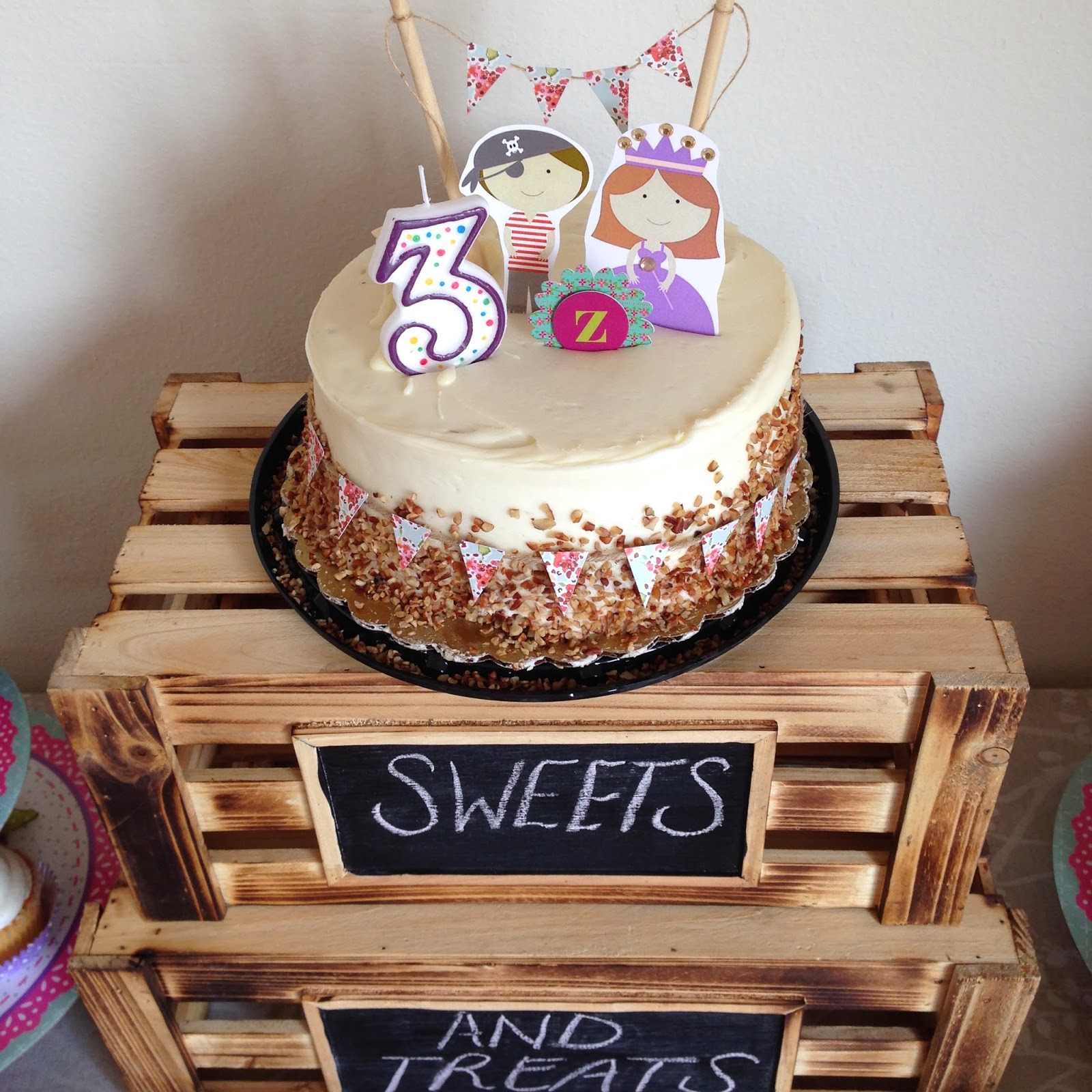 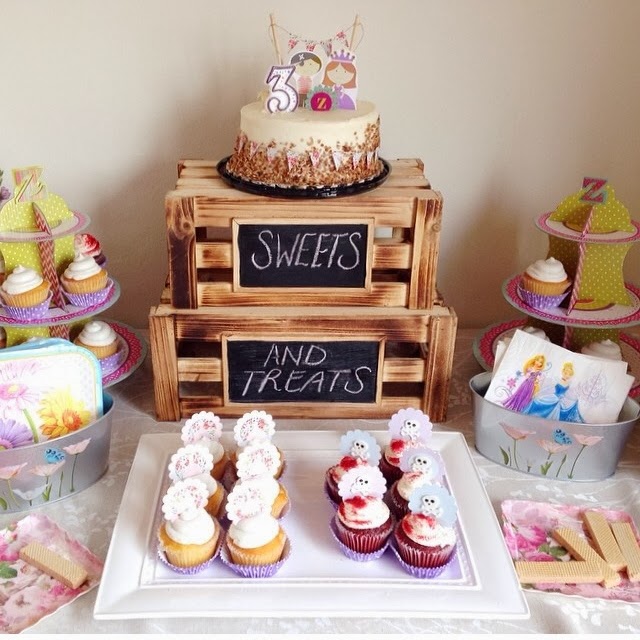 I created a cute little workspace for the kids to keep them busy in between the food arrival, cake cutting, present opening and games. Remember, these are mostly kids between the ages of 2 and 5, so keeping them entertained kept my home in one piece. I called the workspace the ¨Royal Workshop¨. Girls could decorate their wands and boys could decorate tiny wooden treasure chests. I had stickers, makers, glitter, glue and small embellishments they could use in that space to decorate their gift. The kids loved it and the parents also had the chance to sit with their kids and help. 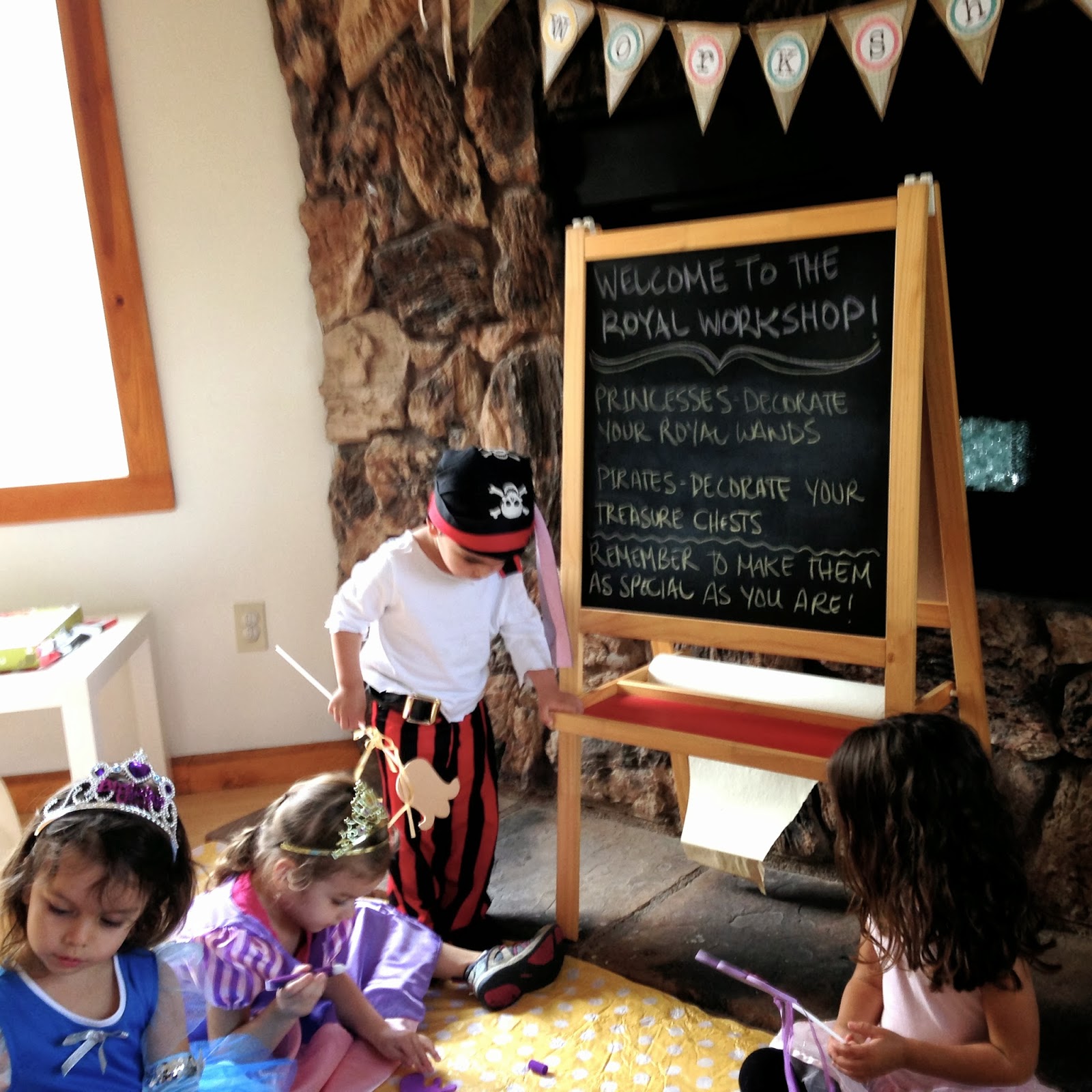 I made the burlap Happy Birthday banner with 5 x 5 cut burlap paper, card stock and letters from my Heidi Grace Alpha Sticker pad. It was so simple and cute. I used lilac ribbon to weave it all together by using a regular hole puncher for the holes at the ends of the triangle. 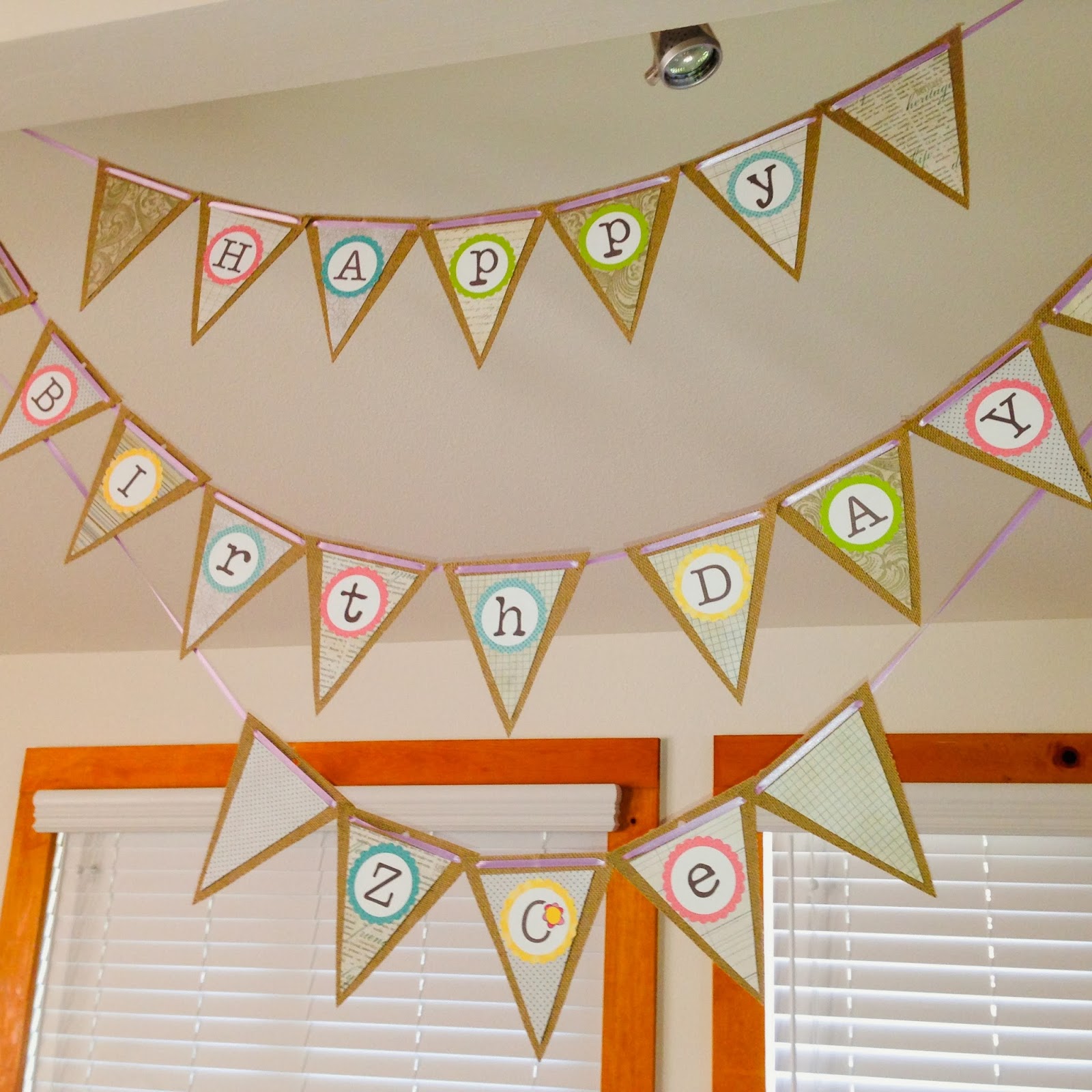 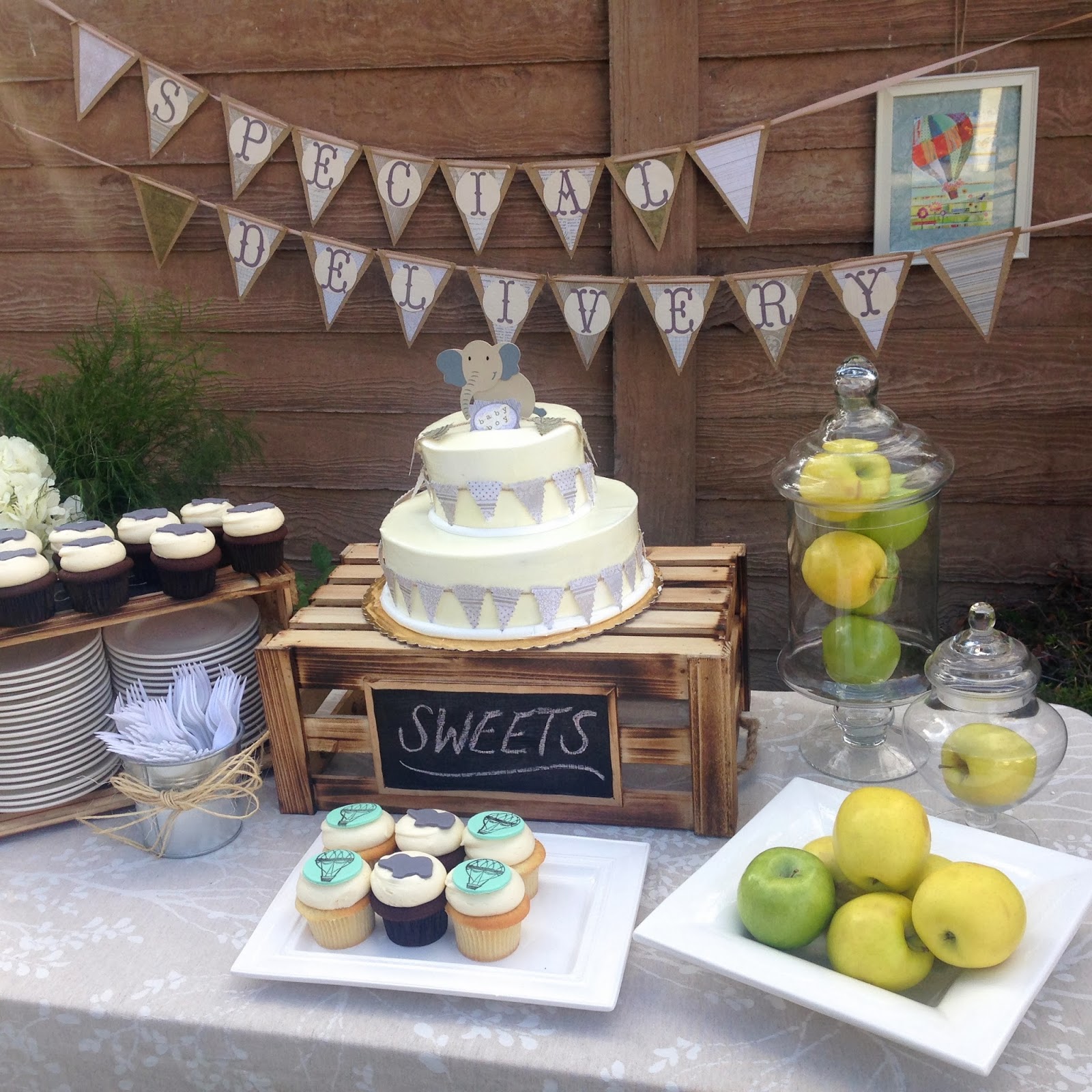 Above is the dessert table I did a few weeks ago for one of my dearest and oldest friends. It was a  Hot Air Balloon & Elephant themed shower. It was an idea inspired by the print she had wanted for the baby´s nursery (shown below). The print is from an etsy store called Field Trip.

I made the ¨Special Delivery¨ banner out of burlap paper I found at Michael´s, scrap booking paper, champagne colored ribbon and a 12x12 Alpha Sticker Pad by Heidi Grace designs. The sticker letters come on and off easily, so the banner can be reused again for another event. I reused the banner for my daughters birthday party. 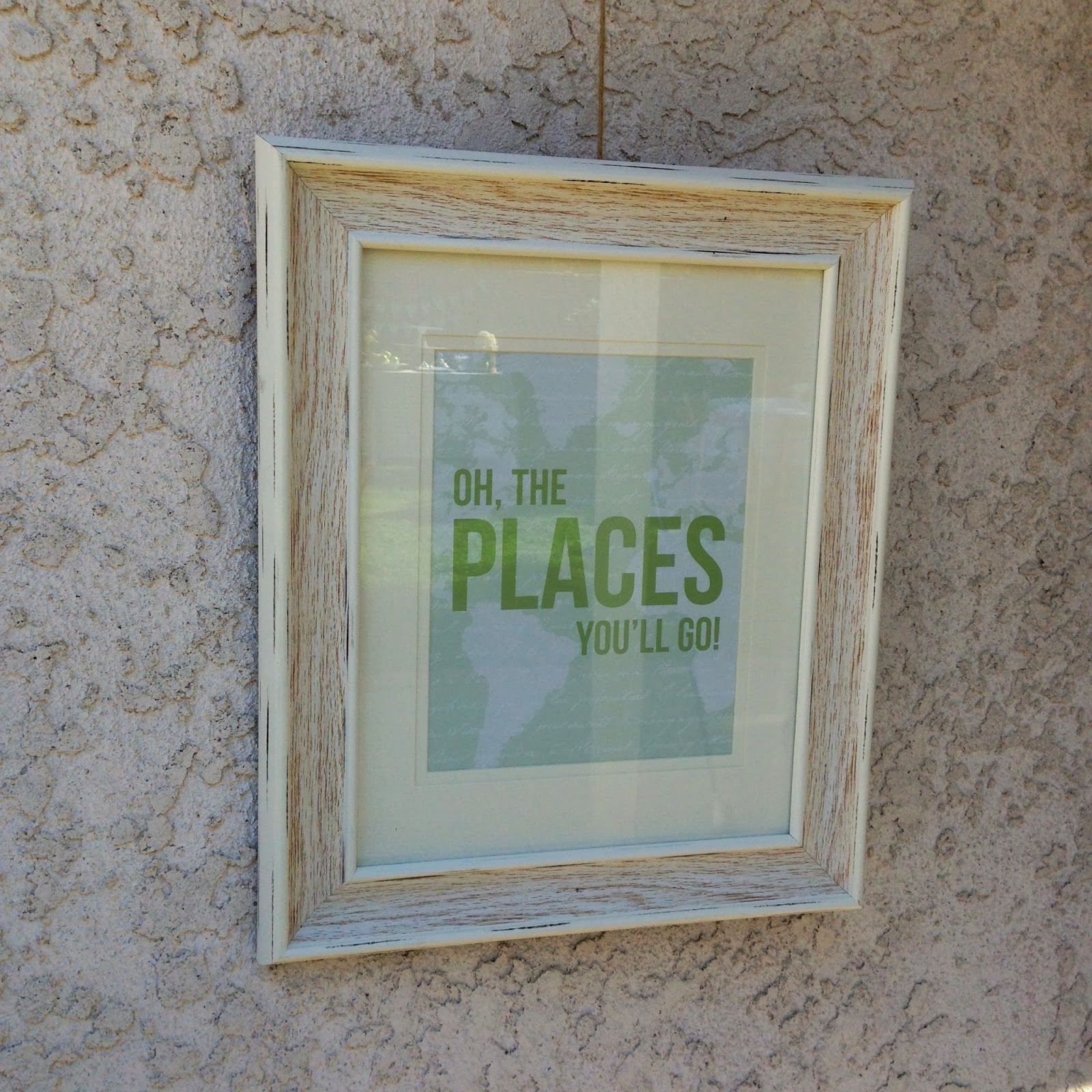 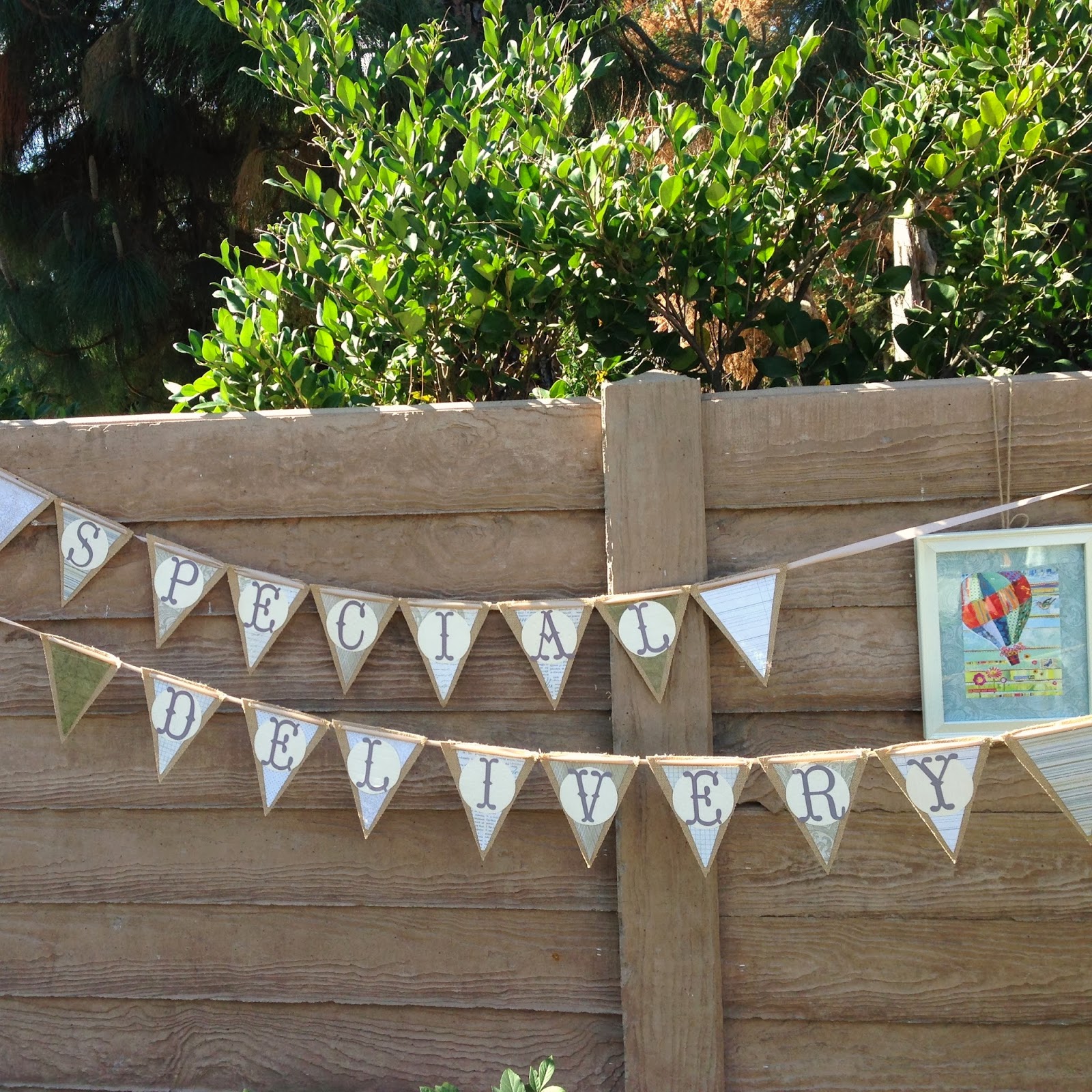 The framed hot air balloon is a greeting card from Trader Joe's I found for $1, framed in a frame I found at The Salvation Army for $1.99. What a steal! 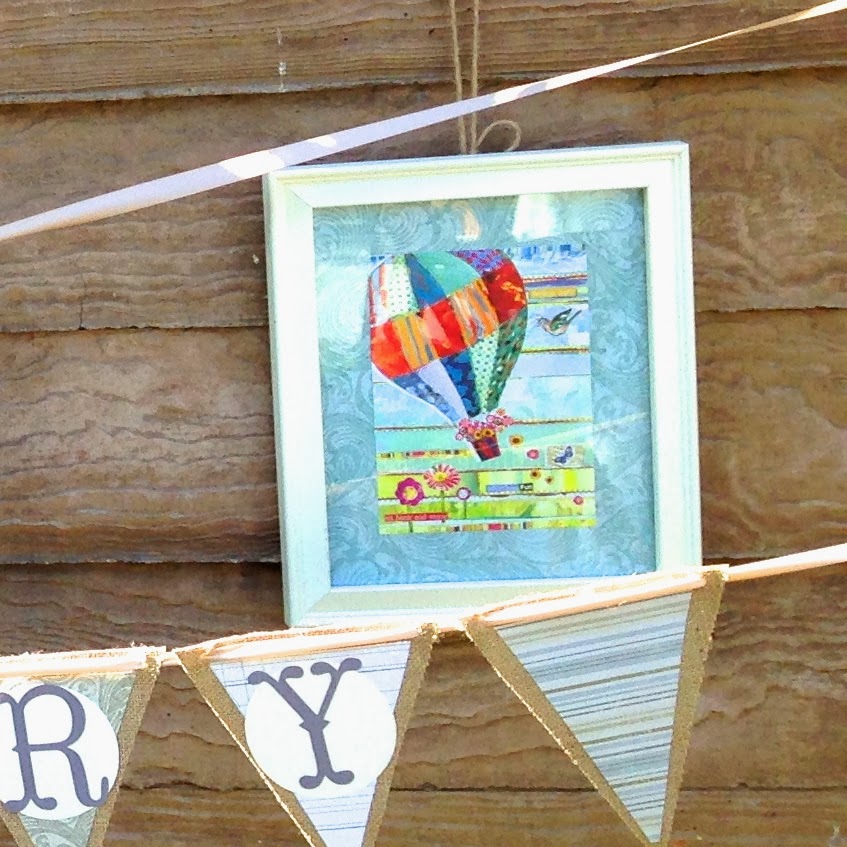 The cake was just a plain two tiered white cake with cream cheese frosting that I added a small banner around using left overs from the banner, twine and a little elephant I found at Michael´s for $1. I used a paper punch and stickers for the ¨baby boy¨ accent. 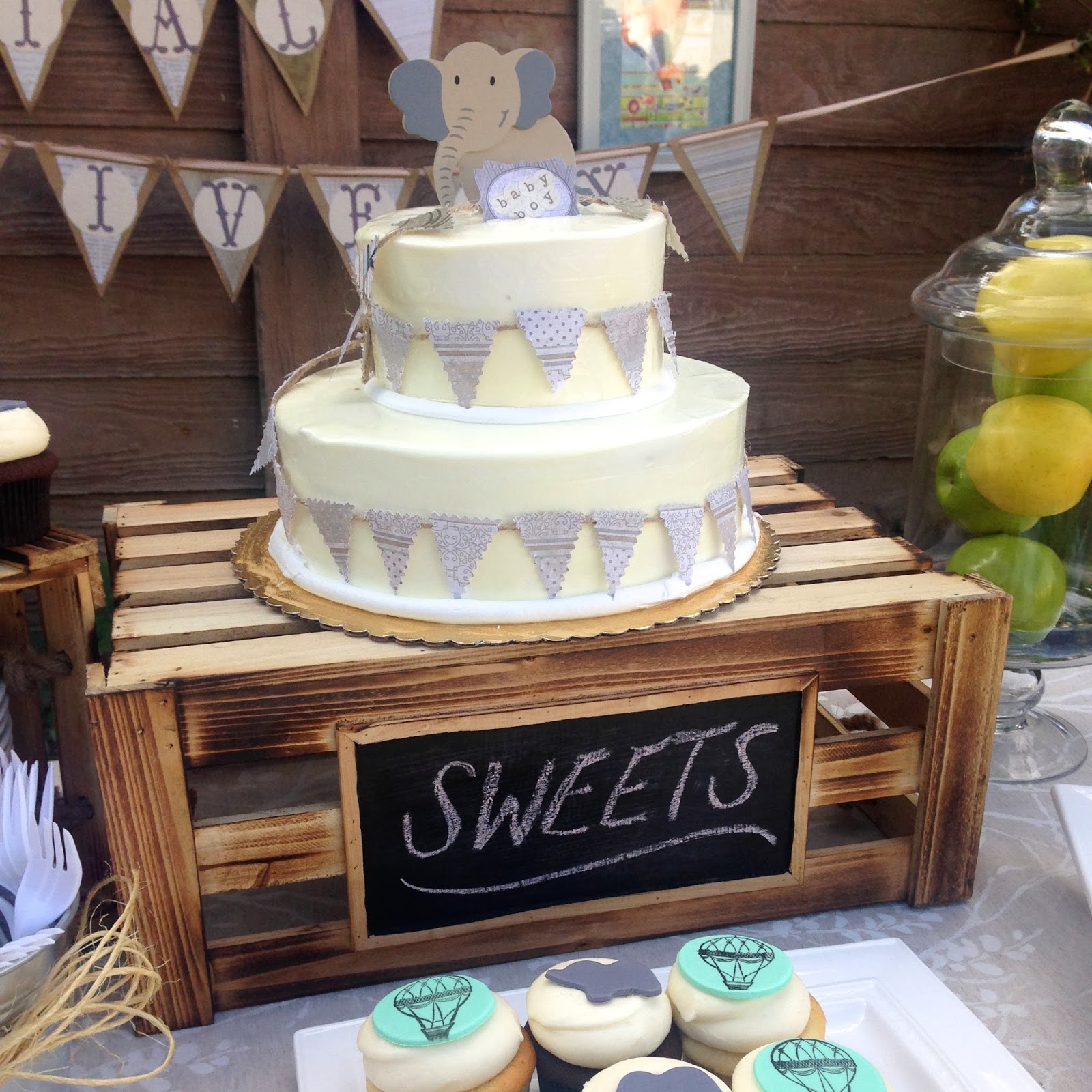 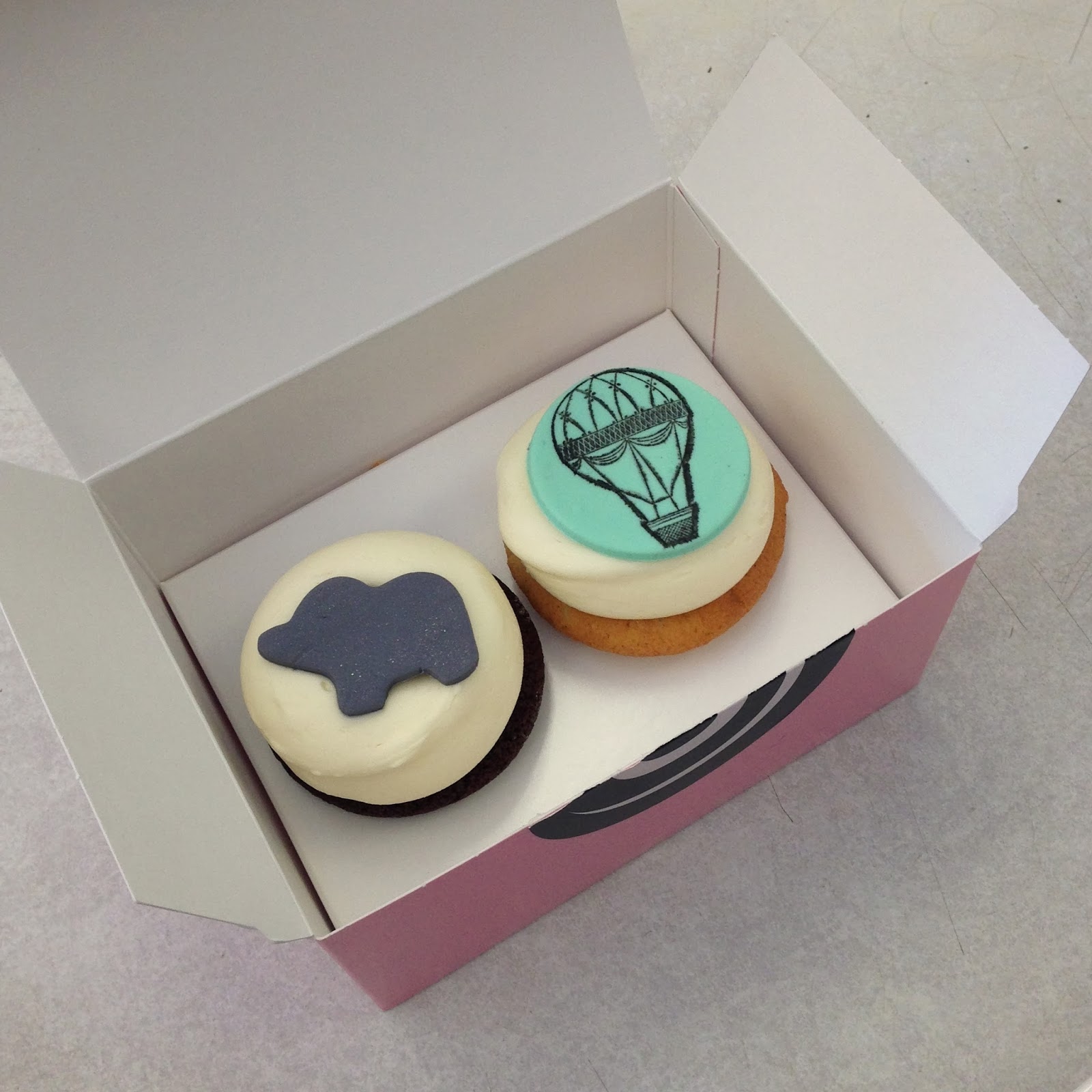 The party favors were little white boxes embellished with scalloped circles from my EK Tools hole punch with little elephants cut out from a 12x12 sheet I bought from Jo Ann Fabrics. Total cost for 40 favors including the Hersey kisses and tissue paper inside was $20. 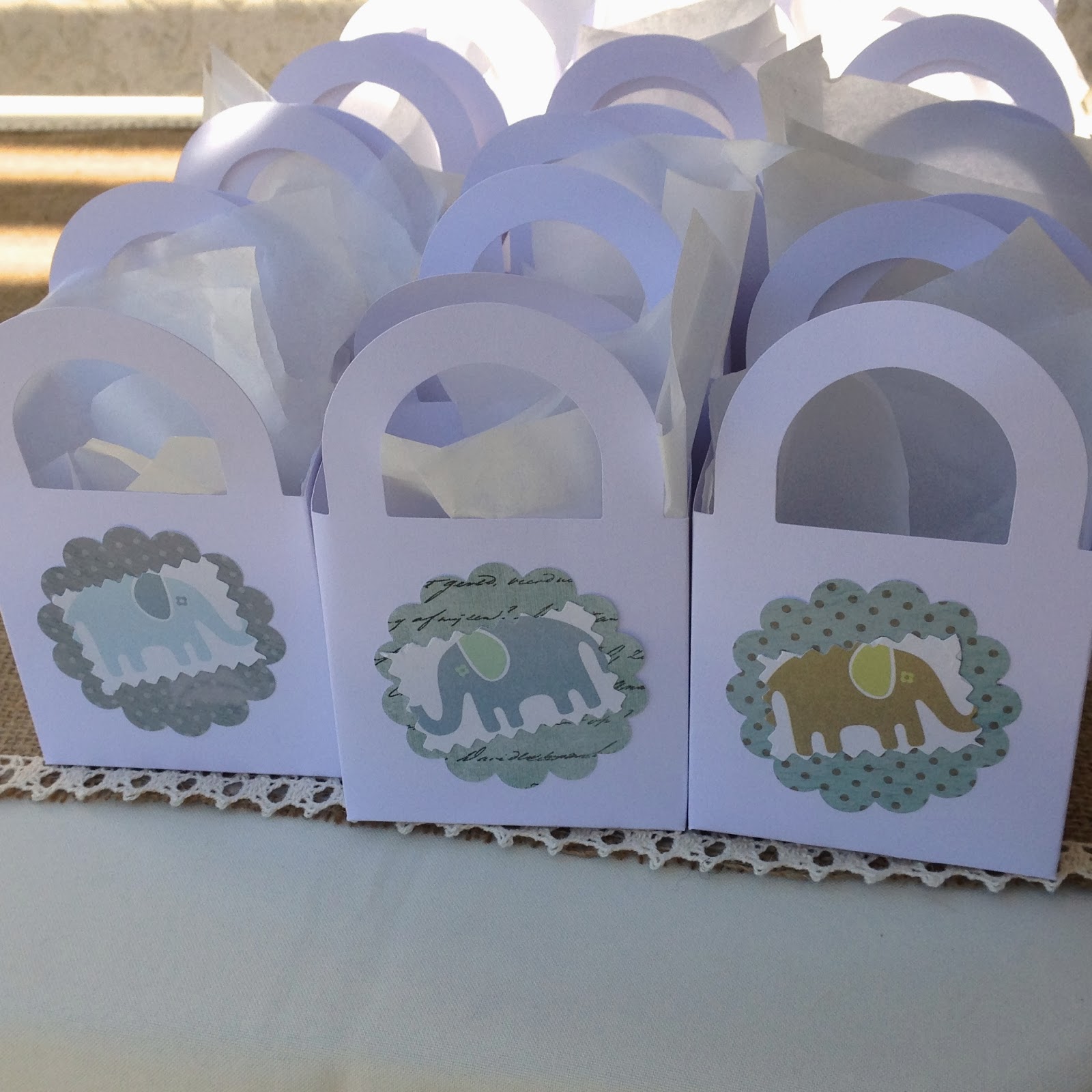 Here is the Halloween Dessert Table I created for the Halloween Party we hosted in our home. I didn't want to use the typical orange, black and white you usually see as the primary decorative Halloween colors. I got the idea of yellow instead of orange from an Etsy banner I found online and went from there.  I hope you enjoy it as much as I enjoyed making it!


I got a little creative with the beverage table too.


Here is what I gave out to the kids as Halloween Party Favors. They loved it and it was very inexpensive to put together.

This is my third dessert table and I am just loving this art form more and more each time! I designed this shabby chic dessert table for the bridal shower of my beautiful friend, Christina Sthair. The theme evolved into a fun, patriotic/shabby chic mix. Her other two amazing bridesmaids handled the patriotic side of the mix with cute flag decor and accents on the guest tables, perfect for the Memorial Day weekend. 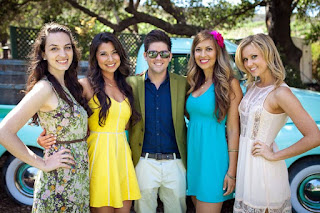 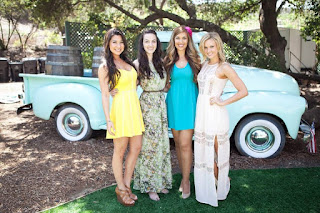 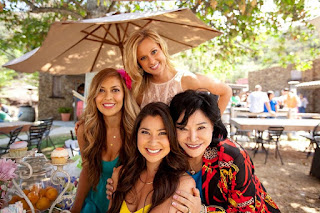 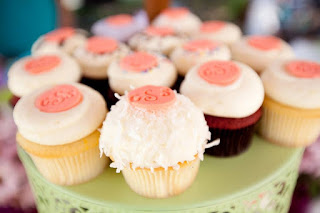 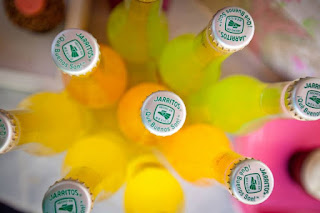 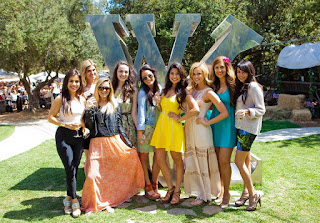 Below is the dessert table I did for my daughter Zoe´s second birthday in February, also in Malibu. Yes folks, you still have sun and beach parties in February here in California. Since my little Pisces adores Finding Nemo and the beach, we decided to have a Finding Nemo themed birthday party at Paradise Cove Cafe, a cool spot where you can wine and dine on the beach. We rented a fun little Cabana facing the water and let the kids run wild in the sand. Party favors included a beach pail filled with a shovel, sun glasses, bubbles and a beach ball. And for the adults, a candy filled message in a bottle. Zoe and the kiddo´s absolutely loved it and it was so much fun to put together!


This was my very first dessert table! I created it for my daughters 1st birthday. Though held in our home, the theme was, The Beach. I had beautiful sea shells borrowed from a friend who is a fisherman, coral colored rock candy, a real fishing net as a runner on the table, lots of burlap and granulated brown sugar as sand. The cake was a signature Chocolate Cake from Susina Bakery on Beverly that I renamed as Zoe's Paradise Cake for the day. But my favorite part was that I had the chance to make bath salts held in recycled baby food jars as party favors. Needless to say, this was a really fun table that allowed a lot of room for creativity.