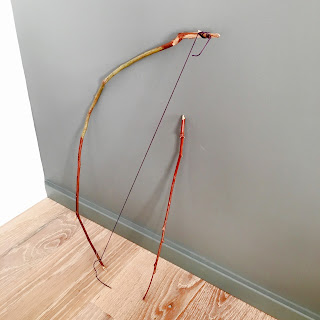 Months ago my little one made this bow and arrow out of two sticks and purple twine she found. I call it ¨Waldorf-ing¨.

She ran around the house with a crazed feral look, shooting at all sorts of things. She quickly learned not to shoot at people because her shots were getting quite accurate and she actually had sharpened the end of her arrow! It was magnificent to watch. She held her arrow inside her shirt or dress that was partially tucked into her leggings...when she found a target (usually her imaginary arc nemesis or magic fruit tree) she would pull the arrow out from behind her, shoot, fetch her arrow and move on to her next quest. Poor thing ended up with tiny scratches on her back from the arrow but she didn't care...¨when you go out shooting arrows, you´re tough.¨

Wow, she really loves that thing...I can buy her a really nice one on Etsy for Christmas...maybe even with her name engraved on it!

Oh, the daydreaming that went on. Yes, she´ll ride around on her imaginary unicorn shooting down fruit from trees. She´ll have MORE than just one arrow and maybe I can even make her a purple quiver to match the twine! I know I can find a pattern on Pinterest!

Right away, I went on to Etsy and spent about 20 minutes before I...woke up.

Wait...why does she have to have one of these these crafted toy bow and arrows? What´s wrong with the one she made? She didn´t ask for a fancy bow & arrow? She has been playing with hers almost everyday! And, she´s proud that she made it! What´s MY problem with that?

I had to meditate on it. And when I say meditate,  I mean I had to actually sit back with the dumbfounded look I sometimes get and really, really, really think about it.

Her bow and arrow is beautiful. It´s special and there is not one like it in the entire world. The end of the arrow is sharpened just enough to shoot down a magic strawberry and her Papa taught her how to tie the twine tightly enough to arc the stick but not break it. When her friends come over, they all get a chance to play with it and they have even asked her to make them one too...how amazing is that? She is so proud of it.

Where was my head?

We all just want what WE think is the best for our children, don't we. Sometimes we do this without really being thoughtful on what is making us feel like one thing is better than the other? When it comes on things like this, I´ve learned it´s all relative...whats better for us may not actually be BETTER for them.  Why not let them wear those jeans with the hole on the side? Sew it up and pass on the ones you saw on the Zara website for only $35...yes, this also happened. They may love those jeans because they play cowboy in them well. Let her wear the bracelet she made out of a toilet paper roll and glitter. The one you buy will not mean as much to her and you´ll save the stress of having her wear a piece of jewelry. Yea, it´s all relative.

Thanks to her bow & arrow I now have more money and time to spend on the things that really matter...like watching her fly across the room shooting at magic strawberry trees in search of Captain Hook.
Posted by Suzi Bach at 12:55 PM